Biological superiority with an innovative twist, to improve your biogas potential.

Containing a proven strain of Lactobacillus plantarum to create a fast, lactic fermentation. With the addition of citrate, which is converted by the bacteria to powerful yeast and mould inhibiting compounds, Activator Plus CA creates the all-important conditions needed to preserve feedstock dry matter.

Why Activator Plus CA?

Supplies one million Lactobacillus plantarum per gram of forage, Activator Plus CA dominates the microbial population within the clamp, efficiently producing lactic acid and thereby creating a fast drop in pH.

During fermentation the added citrate is converted to diacetyl – a more powerful inhibitor of yeasts and moulds than acetic acid – giving increased aerobic stability and reducing spoilage. These characteristics show Activator Plus CA to be very effective at conserving silage dry matter when compared to other biological inoculants.

The more dry matter conserved the greater the biogas potential.

By using the citrate in Activator Plus CA, as opposed to another strain of bacteria, it is more effective at preventing aerobic spoilage as well as giving you more control. The citrate gets to work faster than heterofermentative bacteria, such of Lactobacillus buchneri, (used in many inoculants) giving greater protection to your silage.

The graph below shows the ability of Activator Plus CA to protect against aerobic spoilage. 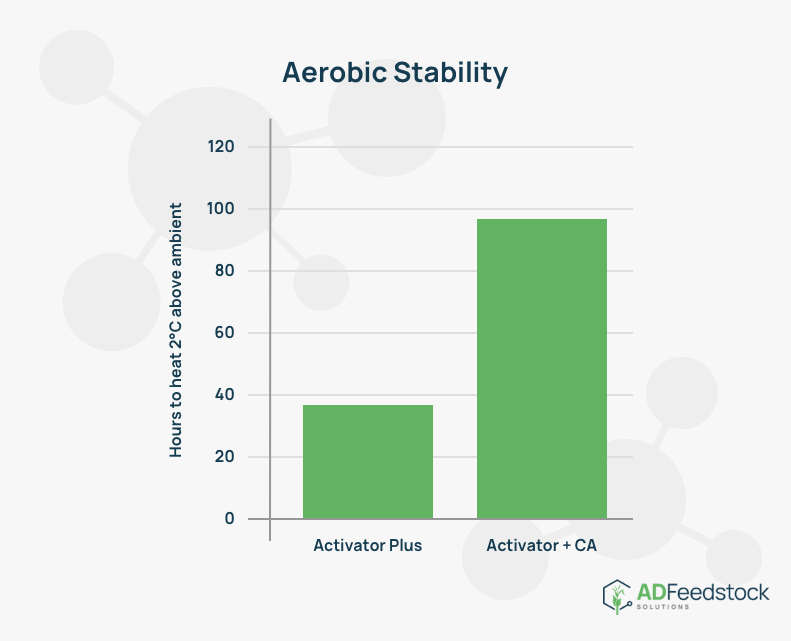 Many inoculants use heterofermentative bacteria to produce acetic acid from glucose in order to control yeasts and moulds in the silage clamp. However, this pathway also results in the production of carbon dioxide and water – that, in itself, is a loss of dry matter.

In contrast, Activator Plus CA uses the added citrate to prevent yeast and mould activity – with NO dry matter loss in the process.

In addition, diacetyl is more a more potent agent than acetic acid in the fight against yeasts and moulds and, therefore, is needed in much lower quantities:

Acetic Acid is for the digester, not the silage clamp

The production of acetic acid by heterofermentative inoculants to inhibit yeasts and moulds also produces carbon dioxide and water – this is dry matter loss.

These dry matter losses produce silage of a lower biogas potential because a proportion of the readily available energy fractions have been converted into CO2 and water.